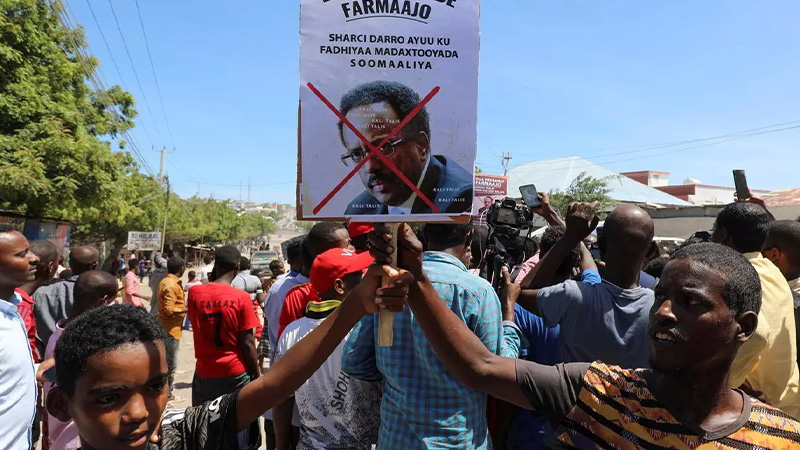 MOGADISHU (Somaliguardian) – A dispute over the administration of the process in which MPs representing Jubaland and Somaliland in Somalia’s parliament threatens to sink an agreement signed by the prime minister and regional presidents on May 27, ending months-long stalemate over delayed polls.

Just less than two months following the deal, two rival teams of an election committee appointed to the manage the selection of MPs from Somaliland chose two leaders, triggering fear over parallel elections.

The two teams, one loyal to the deputy prime minister Mahdi Guled – a close ally of the current acting president Mohamed Abdullahi Farmajo and the other linked to the Senate leader Abdi Hashi Abdullahi, blamed each other for the widening rift.

Abdi Hashi Abdullahi’s allies say the team picked by the deputy prime minister was stacked with state employees and called for their removal, despite the other party’s insistence on moving ahead with the task to which they had been assigned.

Elsewhere in the country, tensions have also been simmering in Gedo region over the way an upcoming vote would be conducted in the town of Garbaharey, an epicenter of long-running dispute between Somalia’s outgoing president and Jubaland leader.

Farmajo and his intelligence chief have been accused of airlifting a group of traditional leaders aligned with them to the town and detaining local elders to ensure that the vote results in their favor, though the federal government in Mogadishu has not immediately commented on the allegations.

The prime minister Mohamed Hussein Roble, who had been assigned to lead the strife-torn country to elections, cut short a visit to the town on Sunday, due to unrevealed circumstances but there were reports that had chosen to leave due to mounting tensions in the town. Roble has also been facing pressure from Farmajo and the national intelligence chief.

Deputy head of the Somali spy agency is visiting the town and is coordinating efforts to form a new administration for Garbaharey. Candidates running for the position of the district’s commissioner had been barred from attending flights heading to Garbaharey, a former MP said on Saturday, who also accused Farmajo and his intelligence chief of undermining the premier’s reconciliation efforts.

A tiff also remains over the selection of MPs from Puntland region. Somali minister of planning accused the region’s president last week that he had been “meddling” in the election process and used intimidation to influence the selection of new members of parliament from the region, a charge authorities in the semi-autonomous state later denied.

There has been a growing row over the upcoming parliamentary election in Hiran region and a regional cabinet meeting in the town of Baladwayne sparked deadly gunfight last week.

Just weeks after the prime minister said he was committed to free and fair polls, tensions have renewed and a stalemate over the upcoming polls seems to be still dragging on, receding hopes that the upcoming presidential vote will be held on its new date.