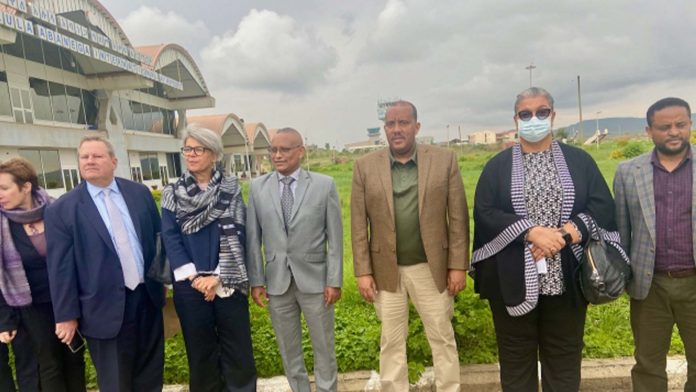 The United States and European Union envoys for the Horn of Africa have urged Ethiopia’s government to resume essential services in Tigray after a rare visit to the war-torn region facing dire conditions.

Tigray has been struggling to cope with food shortages and no access to basic utilities since June 2021, when Tigrayan rebels recaptured it from federal forces.

In recent weeks, Prime Minister Abiy Ahmed’s government and the Tigray People’s Liberation Front (TPLF) have both raised the prospect of negotiations to end the brutal conflict, which erupted in late 2020.

There have also been renewed diplomatic efforts of late, with new US envoy Mike Hammer and EU envoy Annette Weber visiting Ethiopia to hold talks, including with TPLF leader Debretsion Gebremichael, in Tigray.

“A swift restoration of electricity, telecom, banking, and other basic services in Tigray is essential for the people of Tigray,” the two envoys said in a joint statement.

“Equally, unfettered humanitarian access to Tigray and the Afar and Amhara neighboring regions affected by the conflict is imperative, accompanies by the lifting of restrictions on cash, fuel and fertilisers.”

Debretsion, who last week warned that key services would have to be reinstated in Tigray before negotiations could begin, offered “security guarantees for those who need to work to restore services”, the envoys said.

“With this security assurance, there should be no obstacle for the restoration of services to begin,” they added.

The diplomats also called for unfettered aid deliveries to Tigray and the neighbouring conflict-hit regions of Afar and Amhara, and urged the government to lift restrictions on cash and fuel to Tigray.

More than 13 million people need food assistance across northern Ethiopia, according to the United Nations.

Fighting erupted in Tigray in November 2020 and spilled over into the neighbouring regions of Afar and Amhara last year.

However, the conflict has somewhat eased since the federal government declared a unilateral humanitarian ceasefire in March.

The envoys’ visit partially coincided with a trip by UN rights experts to Ethiopia last week as the three-member team attempts to investigate abuses committed in Tigray during the war.

Ethiopia originally rejected the decision to create a commission, calling it “counter-productive”, before eventually approving its arrival in the country.

In a statement released on Tuesday, the commission said it had concluded its first visit to Ethiopia and met with the deputy prime minister, the minister of justice and other senior officials.

“The Commission hopes that the government will provide it with unhindered access without delay, so that it may visit sites and speak freely and privately with survivors, witnesses, and other persons of interest,” it said.

Millions of people have been displaced in the war-ravaged northern province of Tigray, according to the UN.

Tigray’s leaders accuse Prime Minister Ahmed of wanting to centralise power at the expense of the regions. He accuses them of wanting to regain national power, which they lost to him after he was appointed prime minister in 2018.