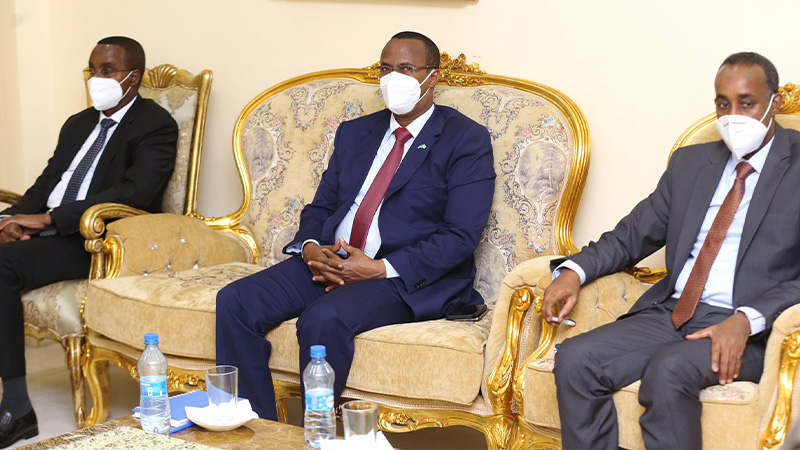 MOGADISHU (Somaliguardian) – Last-minute talks between Somalia’s president Mohamed Abdullahi Farmajo and the leaders of regional states collapsed, just a few days after a summit facilitated by the international community opened at a heavily guarded base in Mogadishu.

The breakdown of the talks was due to a number of key sticking points on which both sides refused to make compromises, despite pressure building on Somali leaders to reach a deal so that the country’s elections can be held without a further delay.

It comes hours after the country’s international partners, including the United Nations, the United States and the United Kingdom as well as a host of other countries called on the Somali political stakeholders to settle their dispute for the sake of the approaching month of Ramadan.

Puntland and Jubaland leaders proposed that issues – including legitimacy of Mohamed Abdullahi Farmajo’s mandate, security responsibility during elections and the participation of observers from the international partners in forthcoming summit on elections – be added to the agenda.

But president Farmajo, whose term had ended two months ago, and is allegedly willing to serve beyond his term through automatic extension of mandate rebuffed all proposals by the regional state leaders, insisting that September 17 2020 and February 16 2021 agreements be adopted to the upcoming elections, though Jubaland and Puntland leaders claim the president himself had reneged on the previous deals.

Somali information Minister Osman Abokar Dube blamed Puntland and Jubaland leaders’ unwillingness to end the deadlock for the collapse of the talks and accused them of being against efforts aimed at holding elections.

It is unclear if the international partners will intervene and take the lead in the election talks after Somali leaders have failed to resolve dispute over the elections on their own.