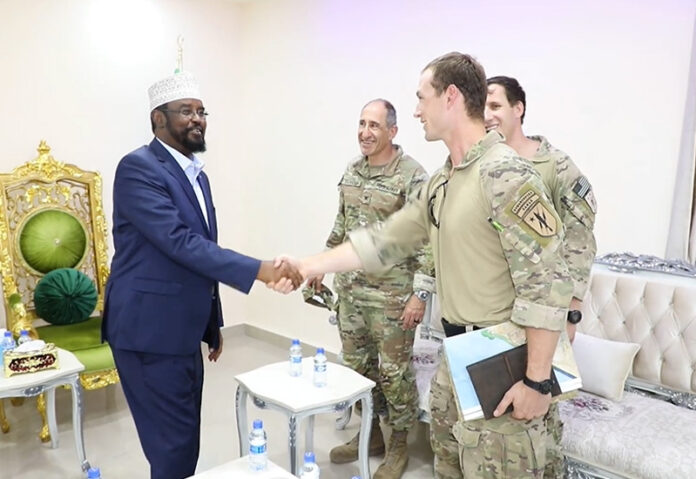 MOGADISHU (Somaliguardian) – President of southern Somalia’s semi-autonomous region of Jubaland Ahmed Madobe on Saturday met US military officials in the coastal town of Kismayo, the seat of power for his administration.

It comes as the government of US president Joe Biden weighs sending hundreds of troops back to Somalia to help the fight against the Al-Qaeda-aligned militant group Al-Shabaab, which has continued an insurgency campaign against western-backed government based in Mogadishu and African Union troops for more than 14 years.

Former US president Donald Trump ordered the withdrawal of approximately 700 American troops from Somalia, who have been redeployed to neighboring Kenya and Djibouti, in what Somali authorities said could embolden the Islamist group.

Jubaland leader received at his office a US military delegation led by Col. Thomas Sarrouf, the head of AFRICOM’s counter terrorism operations in Somalia, where talks on intensifying the fight against Al-Shabaab have been held.

The meeting followed a visit by the Somali army chief Gen. Odowa Yusuf Rage to the town, whose surrounding towns and villages are still held by militants.

US military has conducted dozens of air strikes in Somalia in the past years as part of efforts aimed to “degrade” Al-Shabaab, though security experts raised concern that air raids alone could not weaken the group’s strength and that well-coordinated Somali-led ground operations were needed.

US calls on Somalia’s President, PM to Solve Dispute

Ethiopia’s Army Launches Offensive on All Fronts Against Tigray Forces